Oak Extensions – they don’t have to compromise character

Often we are approached by clients who love the idea of an green oak extension, and yet they have one concern – that it will compromise the aesthetics of their original home. Whether a quaint cottage or traditional stone home, the idea of having a ‘tacked on’ extension is naturally something they are wary of.

However, we pride ourselves on designing and executing timber frames that have a natural synergy with the existing build. We assess roof-line, property shape, and the flow of the natural materials to ensure that the resulting extension is nothing but an asset to your home.

Take Warren Coach House, for example. The owners wanted to double the size of their property, while not losing the charm of their lovely stone built coach house. The subtle contrast in materials blends wonderfully and will only improve as the cladding mellows to a silver grey.

We were also approached by the owners of a fabulous house in Falmouth called Menkea Wartha. The existing property? A large single story cottage. But the client wanted something rather ambitious – an oak extension that not only reached across but down as well, creating a two-story build. We made sure not to raise the existing roof line, so the result is a timber framed home of grand proportions that feels as though it has always been there, with an extension that in no way compromises the traditional feel of the build and yet adds huge amounts of space. 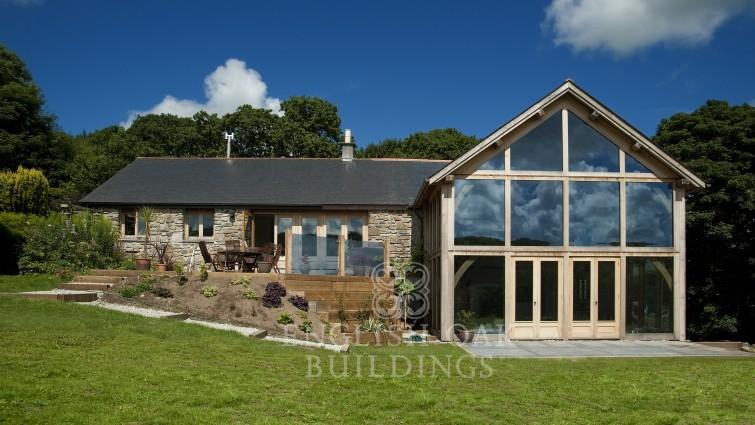 So if you’re thinking of extending your property with a green oak frame, but want to retain the character and charm of your existing build, then get into contact today.